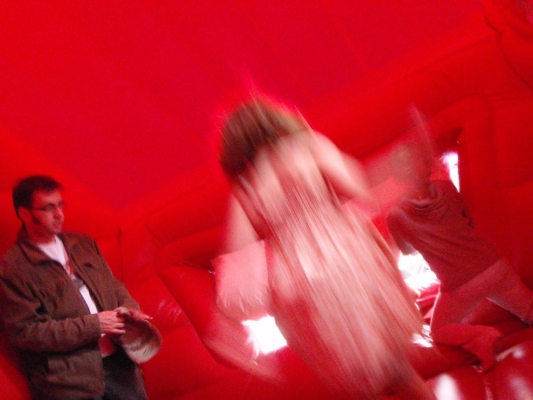 We have developed a new sensor data collection system using the wireless Bluetooth Arduino microcontroller boards. Three 3-axis (XYZ) accelerometers (ADXL3 from Spark Fun) were connected to the analogue input pins on the Arduino (X and Y axes only per accelerometer). The accelerometers were positioned near each of the three “mouths” of the inflatable, and picked up the bouncing movements of people inside. This movement data was then sent wirelessly to a PC laptop. Setting up the Bluetooth connection was the most problematic part of the operation. Originally we intended to use three BT Arduino boards simultaneously, but I found that they come pre-configured with the same identifying name, even though they do transmit a unique network address. As a result the PC wouldn’t allow more than one BT Arduino to connect at the same time. I believe there must be a way to re-configure the boards but I didn’t have time to do this before Eurocultured. Even using just one BT Arduino, I still had to re-connect the Arduino to the PC each time I re-started the system using the clumsy Windows Bluetooth wizard. Once connected the connection held up remarkably well. The sensor data was sent as a list of numbers which was filtered and sorted inside a Max patch. As the accelerometers are VERY sensitive, it was necessary to filter out some of the data so we would only get usable readings when someone was actually interacting with the installation. These numbers were then used to control various instruments within Reason using Rewire control. This allowed more sophisticated sounds and samples to be used than the basic midi instruments that can be controlled from Max. Max’s Rewire control of Reason was the weakest link of the system – it would crash rather arbitrarily, sometimes after a few minutes, other times running for an hour or so with no problem. It seemed that the amount of midi data being transmitted between Max and Reason had some affect on the system stability.