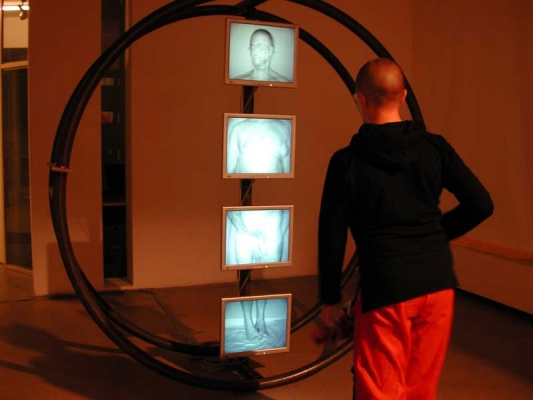 What is interactivity, and how to define various elements of interactivity in media art? How to integrate fashion, art and intelligent design? What is the role of the institutional art world? Does the interactive art conform to the curatorial and institutional practices of the art world? How do we encounter interactive art in public and virtual spaces? Art used as a platform for social connectivity, disturbance and political initiatives, could it be a strategy for the contemporary avantgarde?
The seminar “Passionately in LOVE with Interactive Art” evolves thematically around the multidisciplinary terrain of the interactive technologies and art. How to define the epistemological starting points and methods for practice based research?

Janis Jefferies is Director of the Constance Howard Resource and Research Centre in Textiles (CHRRCT) and Artistic Director of Goldsmiths Digital Studios at Goldsmiths College, University of London. She convenes the MFA
in Computational Studio Arts and the PHD in Arts and Computational Technology. recognised as the the first practice based research degree in computational creativity in the University of London,UK. Both programmes are run through Goldsmiths Digital Studios, which was established in 2005 as a research centre investigating innovative practices, forging links between digital technologies and artistic practice.  Leading academic specialists with interests in computing, art, music, design and culture staff the Studios. The
staff work closely with artists and digital media professionals – from the culture industries, film production, design consultancies, museums and galleries, interactive media content providers, software development houses, and hardware design laboratories – to explore and extend the use of today’s digital technology and to define and implement the art and design technologies of tomorrow.

Goldsmiths Digital Studios is jointly directed by Janis Jefferies  (Professor of Visual Arts) and Robert Zimmer (Professor of Computing). Jefferies is recognised by her peers as one of the leading practitioner /theorists of her generation, through solo exhibitions of work (UK, Poland, America, Canada and Australia), conferences and professional seminars (e.g. UK, America, Iceland, Italy, Spain, Latvia, Estonia, Lithuania, Russia), and artist residencies at the Universities of Wollongong and Newcastle (Australia), visiting professorships at Art Institute of Chicago, and University of South Australia,

Professor Erkki Huhtamo is a media archaeologist, writer and exhibition curator. At Design/Media, University of California, Los Angeles, United States
his area is media history and theory. Professor Huhtamo holds a Ph. D. in Cultural History. He has written extensively on media archaeology and the media arts. Media archaeology is an emerging critical approach Professor Huhtamo has pioneered (together with a few other scholars) since the early 1990’s. It excavates forgotten, neglected and suppressed media-cultural phenomena, helping us to penetrate beyond canonized accounts about media culture. Huhtamo pays particular attention to the “life” of topoi, or clichéd elements that emerge over and over again in media history and provide “molds” for experiences. What may seem new often proves to be just new packaging of ideas repeated during hundreds and even thousands of years.

In recent years, Professor Huhtamo has applied this approach to phenomena like peep media, the notion of the screen, games and mobile media. He has also written about the ways in which media artists like Paul deMarinis, Rafael Lozano-Hemmer and Bernie Lubell have integrated media-archaeological elements into their work. Professor Huhtamo has just finished a book on the history of the moving panorama and the diorama, tentatively titled Illusions in Motion (California University Press, forthcoming 2009). With Dr. Jussi Parikka (Anglia Ruskin University, Cambridge, UK) he is preparing a collection of writings on media archaeology, also for California University Press (forthcoming 2009).

MINNA TARKKA
Researcher, Director for m-cult
Minna Tarkka is a researcher, producer, critic and educator of media arts and design. Her areas of expetise are in cultural, social and participatory approaches to new media and technology.
From the late 1980´s on she has been lecturing and contributing to new media-related curriculum development in Finnish universities, including the Academy of Fine Arts (Time and Space) and the University of Art and Design (Media Lab). In 1996-2001 she was professor of interactive and multimedia communication at the UIAH Media Lab. As head of the lab´s MA in New Media programme, she initiated research-oriented study projects in digital museums, interactive television as well as critical art and design practice. In professional training, she has led international masterclasses on interactive art and design.
Her research activities relate to the field of new media arts and design, technology and policy. At UIAH she led the Cultural Usability research project on reflexive design practice (2000-01). During her senior researcher position in the National Consumer Research Centre´s Users as collaborators project (2002-03), she focused on practices in new media culture, digital television and location-based wireless development. As director of m-cult, she has been responsible for developing and coordinating several research projects, including the Urban Spaces and Experience Design project (Finnish Academy and the Arts Council of Finland 2005-07). Her doctoral dissertation Performing new media will be finalised in 2005 in a research position at the Department of Social Science and Philosophy, University of Jyväskylä.

Taking the combined roles of artist, urban planner, activist, researcher and resident, Michael Pinsky uses diverse media such as video, performance, mapping systems and sculpture to explore geopolitical aspects of a site. Through the displacement and conflation of existing objects and activities he critiques the impact of society’s behaviour.

Dr Michael Pinsky graduated from the Royal College of Art and is Senior Lecturer at East London University. He received an Art for Architecture award from the RSA and his exhibition Pontis was shortlisted for the prestigious Gulbenkian Museums Award.

Erich Berger (AT) works as artist, curator, researcher and educator and currently lives in Gijon/Spain. Berger is trained as an engineer for communication engineering and electronics. He has an MA in philosophy with an interdisciplinary approach combining mechatronic and philosophy. Since the mid nineties Berger works as an artist. He is interested in information processes and feedback structures which he investigates with installations, situations, performances and various interfaces.

His work is shown internationally in festivals, exhibitions and galleries. Together with the sound artist PURE he founded the audio visual impro duo TERMINALBEACH (2002). He received a Prix Ars Electronica Award of Distinction together with the Telezone-Group for the project TELEZONE (2000), the Intermedium2 Award, Bawarian Broadcasting Station / ZKM together with the group 92v2.0 for A SOPHISTICATED SOIREE (2002) and a Honorary Mention from VIDA 5.0 Art and Artificial Life international Competition together with Laura Beloff for the installation SPINNE (2002).

From 1996-1999 Berger was at the Ars Electronica Center and Ars Electronica Futurelab. 1998 and 1999 he was technical director of the Ars Electronica Festival. From 1999-2002 Berger was working for the Vienna/Austria based it-company Ideal Communications as a researcher and knowledge manager. Since 2003 Berger gives workshops about physical computing, interaction design and related subjects. 2004 and 2005 he was developing and directing the MAKING SENSE project at the Oslo/Norway based media lab Atelier Nord, a research and education program about physical computing for artists and designers. 2006 Berger was artistic director and curator for the INTERFACE & SOCIETY project at the Oslo/Norway based media lab Atelier Nord which investigated artistic practices and strategies which deal with the transformation of our everyday life through electronic interfaces. 2007 and 2008 Berger was working as Chief Curator at LABoral Center for Art and Industrial Creation in Gijon/Spain. He currently works in a research project about fashionable technology financed by the Austrian government and on a project about climate change with the Finnish Bio-Art Association in Kilpisjaervi Lapland. More about his work is accessible at http://randomseed.org .

Born 1960. Studied philosophy, art history and general literature at both the University of Amsterdam and Amsterdam’s Free University. In 1989, he earned a Ph.D. (University of Amsterdam) writing an art philosophical thesis entitled Fomalistic Temperament. From 1989 to 1993, he was involved in a post-doc project researching the foundations of art and cultural science for Brussels’ Free University. In 1993 he established the Global Vernunft Foundation, which organizes and executes projects (exhibitions, symposia, graduate teaching programs, publications) concerning the interface of philosophy and contemporary art. Since 1994 Henk Slager has been tutor at the Curatorial Training Programme at De Appel Foundation in Amsterdam. From 1998-2004, he was a board member (Ass. Secretary General) of the International Association of Aesthetics and professor of Art Theory at the Higher Institute of Fine Arts (HISK, Antwerp). Currently Henk Slager is dean of the Utrecht Graduate School of Visual Art and Design (MaHKU) and its professor of Artistic Research. He is on the board of Earn (European Network for Artistic Research).

Merja Puustinen works as artist, curator, researcher, lecturer and producer. She is based in Espoo, Finland. She has a background in sculpture, video and installation art. She has studied philosophy and sociology at Helsinki University. Since 1993 she has collaborated with interactive media art performances, network projects and installations in collaboration with her partner Andy Best. They were amongst the first online web artists, and during the mid to late 1990’s worked with virtual multiuser 3D worlds on the internet. With their company Meetfactory they developed a 3D multiuser community platform and virtual pet or tamagotchi for mobile phones. They now concentrate their artistic activites on large scale installations and interactive works. Best and Puustinen also run the Digital Arts degree course at Turku University of Applied Sciences. Merja Puustinen is completing her PhD research on interactive media art at the Academy of Fine Arts, Helsinki
She is particularly interested in combining art, architecture and interactive computer and sensor technologies to recreate physical experiences and elements of play for the end user within the institutional framework of art.