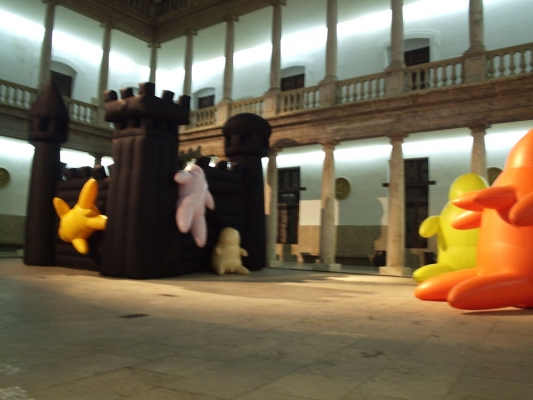 We were invited to take part in the Digital Media Festival 1.0 at La Nau, Valencia, by Egle Oddo from the Namastic Collective. The original idea was to install The Physical Impossibility of Foretelling the Future: Part 1 hanging upside down in the cloisters of the old university, but we immediately ran into difficulties with the authorities, as the building is a protected monument and they were afraid we would damage the structure. We tried lifting the castle up on plinths, but it really didn’t work, so we settled for making an ad-hoc installation with the family group 1+1=5 and the castle. The video work, originally projected inside the castle, was shown inside the building. The fishbots were presented as a performative element during the festival opening.